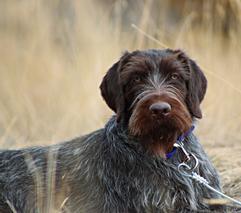 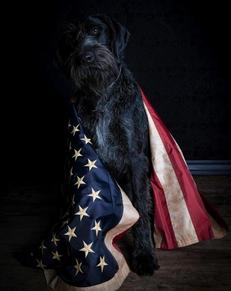 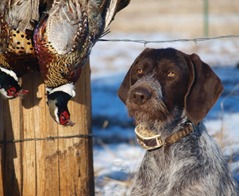 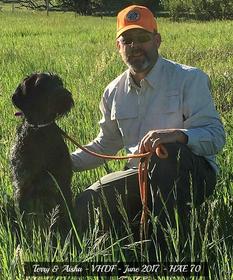 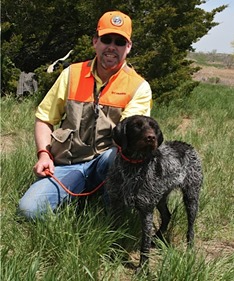 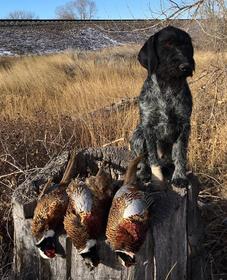 Sheri is the clown of WyoWires. She's an extremely sweet, biddable girl with an excellent, coarse, wash and wear coat. Sheri is a classy pointer in the field and a joy to have in the house. She got her start in AKC shows as a 9 month old pup and was shown very minimally, earning her first 5-point major at her very first show, the Rocky Mountain Cluster.  We brought her back out in 2014 as a 2 year old and finished her AKC Champion title in 2015.  We are looking forward to great things from Sheri as she matures and enhances our breeding program. Sheri earned her first two legs of the AKC Junior Hunter title at the 2015 Nationals and passed her water test at the same time.  She has now completed her JH title and earned her CGC title, as well as becoming out newest GWPCA Versatility Title earner.  Recently, Sheri became a certified Therapy Dog as well and is working towards her AKC THDN title.  Sheri is CERF clear, OFA Hips Good and OFA thyroid normal.  Sheri has produced 3 great litters for us and is now retired and loving life living with "her kid", Tyler! 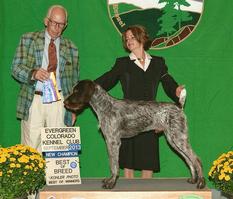 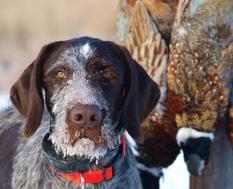 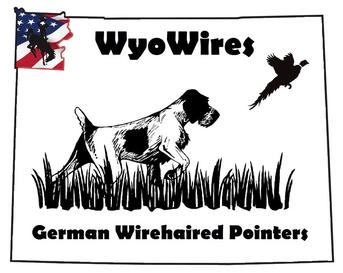 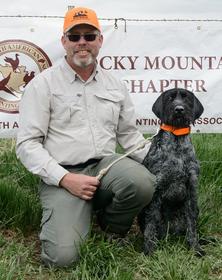 Ember is a personable, biddable, athletic, sweet, talented liver roan daughter of Roxie and Kai (Mueller's Black Star Trials & Tribulations UTII) who is really coming into her own in a big way.  Everyone who meets Ember immediately sees a goofy, but loveable and talented girl.  She ran her NA test at just over 6 months of age earning a Prize 1-112.  The following spring, she ran her NAVHDA Utility test at 18 months and earned a Prize 1 with a maximum score of 204, earning herself a spot in the 2022 NAVHDA Invitational in New Mexico. During this same time period, Ember started working towards her Master Hunter (MH) title and earned her first leg in June of 2020.  She has also earned her CGC (Canine Good Citizen) title.  Ember has a medium dense, medium harsh coat and a nose that never stops. She is a tenacious natural retriever, has a ton of drive and loves the water.  Ember will be bred after the 2022 NAVHDA Invitational. 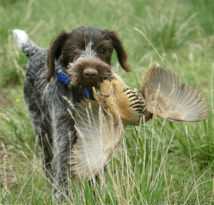 Roxie is a rockstar!  Our Go-To girl, she's now retired after producing NAVHDA Breeder's Award litters and UT prize 1 offspring and we are looking forward to playing the run-and-gun games such as WAGS (Wyoming All-Around Gundog Series) competitions and other bird dog champion games with her for the next several years.  In her youth, Roxie was a prize 1 NA pup with a 112 earned, followed by a UT prize 1 and a bid to the 2019 NAVHDA Invitational.

Remi is an incredibly athletic, sweet, talented black roan daughter of Roxie's who has really made a huge impact on everyone who has met her.  She ran her NA test at 6 months earning a Prize 1-112.  The following spring, she ran her NAVHDA Utility test at 17 months and earned a Prize 1, earning herself a spot in the 2020 NAVHDA Invitational. During this same time period, Remi easily earned her AKC Beginner Novice Obedience title, Rally Novice title, Rally Advanced title, CGC (Canine Good Citizen) and CGCU (Canine Good Citizen Advanced) titles.  Remi has since gone on to earn her obedience CD, Rally Excellent and Master Hunter titles.  Remi possesses an excellent, coarse coat and a nose that is on target at all times. She is a natural retriever, has a ton of drive and is a water-loving fool!  She is the product of Roxie's 2017 NAVHDA Breeder's Award litter by Kai (Mueller's Black Star Trials & Tribulations UTII).  Due to COVID-19 and the postponement of the 2020 NAVHDA Invitational, Remi ran at the 2021 Invitational in Iowa and became our first home-bred, home-trained NAVHDA Versatile Champion.

Grover is an 8-year-old male who was our first AKC show dog.  He earned his AKC champion title at just over 1 year, ran his NAVHDA natural ability test achieving a Prize 1 with a maximum score of 112 and then went on to earn his AKC Grand Champion title with 5 majors at two shows before he was 2. Grover went on to earn his Rally Advanced Excellent title, CGC, CGCA and his GWPCA Versatility title.  Grover also earned his UKC CH title in just one weekend and earned his obedience CD title with only 3 runs. Grover has qualified 5 times to attend the AKC Rally National Championship.  Grover is also a certified Therapy Dog.  When it comes to tough hunting country and multiple species of upland birds, Grover is our Go-To dog.  He's got a can-do and won't-quit attitude in the field and enjoys hunting the rough stuff!  He has an excellent wash and wear coat and a spectacular, willing temperament. He is CERF clear, OFA hips Good, OFA thyroid normal, OFA elbows normal and OFA Advanced Cardiac clear and has completed his CHIC testing. Grover is available for breeding to outside females by live cover or chilled semen and has been producing puppies with his great, willing attitude and temperament as well as terrific coats and tons of drive. 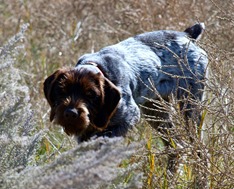 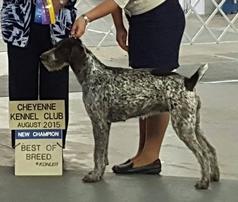 Aisha is the newest addition to the WyoWires clan.  She was imported from Poland in the spring of 2017 and has really made a great impression with everyone she's met so far!  She ran her VHDF HAE (Hunting Aptitude Evaluation) at just 7 months of age and received a score of 70! She then ran her NAVHDA natural ability test at nine months and earned a Prize 1 with a score of 110. Also during that time, Aisha was shown at only two shows, but easily earned both her AKC Beginner Novice Obedience title and her AKC Rally Novice title.  Aisha has now earned her AKC Rally Advanced title, her CD in obedience and her UKC Champion title.  Since that time, Aisha has run her NAVHDA Utility Test and earned a Prize 1 with a maximum score of 204.  She will attend the NAVHDA Invitational in 2022 with the Zia Chapter. Aisha posses an an excellent, coarse coat and a nose that is unrivaled. She is a natural retriever, has a spectacular amount of drive and is a water-loving fool!  Aisha produced her first NAVHDA Breeder's Award litter in 2019 sired by Grover.  Aisha has her CHIC number and is OFA hips excellent, elbows normal, thyroid normal, cardiac normal and CERF clear.